Around Papigo and especially in the Gamila and Astraka Mountains are spectacular caves and dragonflies such as:

the “Provatina”, 408 meters deep, one of the world’s largest vertical chasms. The gulf was created by combined action of water and ice. Characteristically, at a depth of 180 meters there is a small loft with ice, which never melts. There is also a single room with a small pond and commemorative plaques from Greek and foreign missions hanging on the walls.

In particular, the cave was first identified by English cavers, in 1965 (Cambridge University Caving Club). It was first attempted to go down by the Englishman Jim Eyre (in 1966), who reached a depth of 156 m, where the ladders were finished. The following year, English soldiers used a motor winch and a cart with a rope for descending on it. Their attempt was made in two phases, first, up to the depth of -177m in the summer of 1967 and finally to the bottom of the cave (-408) in 1968. The first cavers who reiterated the effort with pure speleology were the French P. Sombardier and F. Poggia in 1976.

Since then, many missions have come down to the cave, both foreign and Greek. The first Greek to descend was Kostas Zoupis, founding member of the Speleological Hellenic Research Group (SHRG). Many other Greek and even more foreign missions visit each year the magnificent gulf. In 1998, Sella tried to continue the exploration and attempted a climb that did not go deeper but gave some small rooms yet. 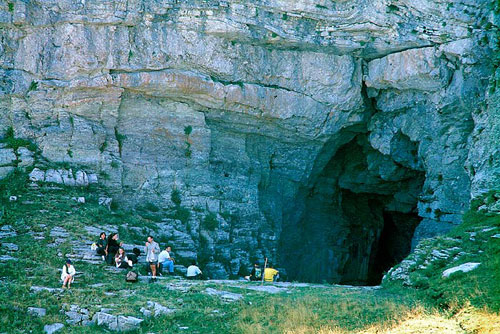 The “Epiphany Chasm”, a stepped trench with a depth of 451 m. The way of its creation is different from that of Provatina. Water is the dominant element since the cave works as a sink and drains the waters from the plateau. There are two different routes that can be followed, Epic I, at a depth of 451 m and Epos II at a depth of 340 m.

The “Hole of the Bride”, with a total depth of 340 m. This cave works like a sink like the Epos, after collecting the waters of the area. It consists of three large p150m, p50m, p120m and two small p10m and p10m, which at the end are so narrow that you can not pass,

Recently, from a series of French speleologists and speleologists of Sellas, a new trench was discovered, “The Hole of Ornius”, 610 meters deep, the exploration of which continues to this day.