The monasteries and churches in Zagori follow their own architecture and are built with materials of the region, namely stone and wood. These buildings date back hundreds of years, since they are chronologically older than the common houses or in the villages. A common feature of the temples is the large outdoor shed with arches, which was a kind of antechamber that protected the faithful from the winter weather conditions. In many monastery churches the door is very low. It is a typical construction of  the area and it was used to prevent the profane conquerors from entering the holy space riding on their horse,  as they used to.

Monastery of the Assumption of Makrinos

Holy Monastery of the Assumption of the Virgin Mary, built in 1700 and located just outside the village.

The tradition states that it was built in 1100 and operated as a monastery, it was rebuilt in the early 17th century (1608/9) with frescoes in four phases, the first of which was in 1616 by the well-known workshop of Linotopitis Michael.

Monastery of the Assumption of Greveniti

Monastery of the Assumption of Greveniti(1620)

Monastery of the Assumption of Doliani

Monastery of the Assumption of Doliani(1791)

Monastery of Saint Nikolaos at Fragades

Below the square of the village Fragades  is a monastery dedicated to Saint Nikolaos. It was built in 1578 or 1600 by a monk named Efthimios. It was completely destroyed by a fire in 1855 and today only the monastery’s church is preserved.

It is dedicated to the memory of the “Assumption of the Virgin Mary”. It was reportedly set up in 1114 AC. However, as it survives today, it was reconstructed in 1787 and was recorded in 1818 AC.

Next to the gorge of Aoos below the top of Gamila is the monastery of Agia Triada Vrysochori, built in 1667.

The church of St. George, built with classic Zagorian architecture in 1793.

About 2 km before Tsepelovo on a forested hill in the area of Rogovo is a monastery dedicated to St Giannis the precursor. It was built in 1028-1034 by Pulcheria the sister of the emperor of Byzantium Romanos III. After the destruction from the Serbian domination, the brothers Kontodemos from Vradeto and the priest Nikodemus rebuilt it. Today, it has no monks, but it is preserved as a historical monument. 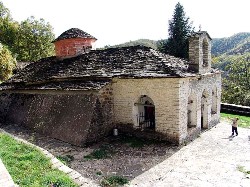 Every year on the 24th of June a feast is held by the monastery.

It is worth mentioning that, in the area of the monastery lies the only point where the two sides of the Vikos gorge stand so close. Interesting locations near the monastery are Ashtario, the chapel of Paliagiorgi, Saint Paraskevi of Rogovo and Palihogifyro.

Monastery of Saint Paraskevi in Skamneli

Monastery of Saint Paraskevi in Monodentri

The oldest temple of the area, built in the late 14th century/ in the beginning of the 15th century and the first phase of frescoes in 1414/15. Built on the edge of the Vikos Gorge, it offers stunning view of the gorge. From the Monastery begins a short steep path that ends up in the natural fortified position of Askitario or else “small houses”. 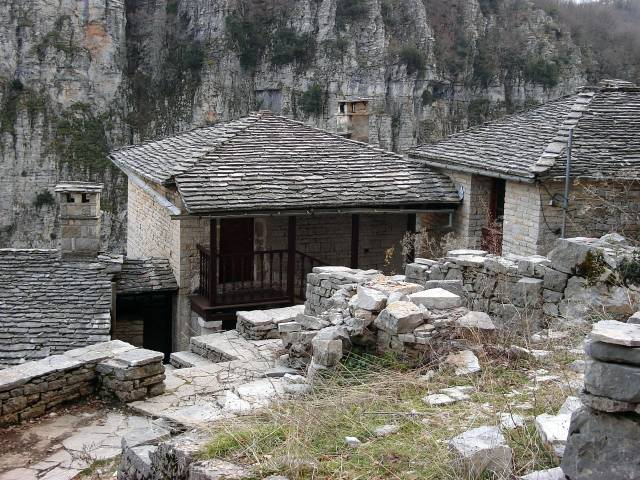 A large monastic complex created in different eras, mainly from the late 17th to the 19th century with an original date in 1793. The frescoes in the church date back to the first decade of the 19th century. Here stayed the famous clergyman and scholar from Ano Pedina Neofitos Doukas. 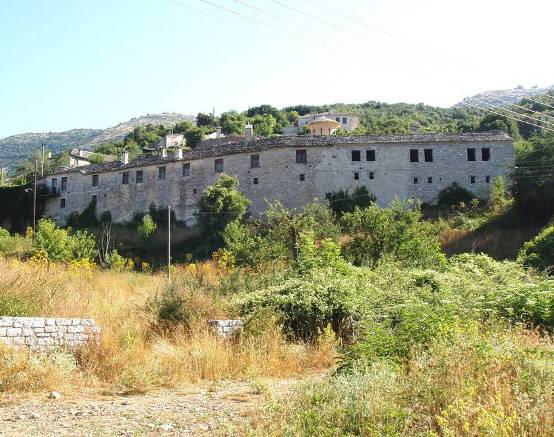 The Monastery of Voutsa is located between the villages of Greveniti, Flambourari, Doliani at the banks of the river Vardas, the riverside of Arachthos. Panagia (Virgin Mary) the Pogoniotissa, as the people used to say. The monastery is built in a magnificent location: in the small valley formed by the passage of the river Varda, in the midst of a beautiful forest. The tradition states that the monastery was founded by the Emperor Constantine IV Pogonatos in 672, but the inscription in the church mentions that it was renovated and recorded in 1680. Although the history of the monastery is lost in the depths of the centuries, the most tragic moment happened in the past century: On October 13, 1943, the Monastery of Voutsa was almost entirely burned by the Germans in the war operations against the rebel groups in the region. It was designated as a historic monument, as a landmark. 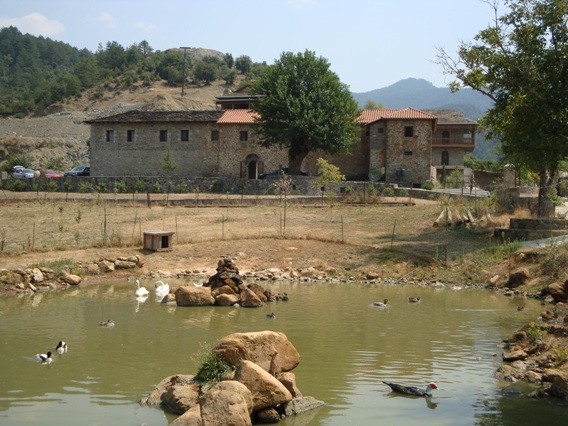 The monasteries and churches in Zagori follow their own architecture and are built with materials of the regions, namely stone and wood. These buildings date back in time, since they are chronologically older than the common houses or mansions of the villages. A typical feature of the temples is the large outdoor shed with arches, which was a kind of antechamber that protected the faithful from the winter weather conditions. In many monastery churches the door is very low, a construction that we often find in the area and was used to prevent the profane conquerors from entering the holy space riding on their horse, as they used to.

Monastery of Evangelistra in Kastraki of Saint Minas

Built in 1573/76 in a place with pre-Christian and medieval habitation. Interesting and unique frescoes of the same period (1576) that refer to the Macedonian art of the 15th century, a fact rare for Epirus.

Monastery of the Assumption of the Virgin in Vikos 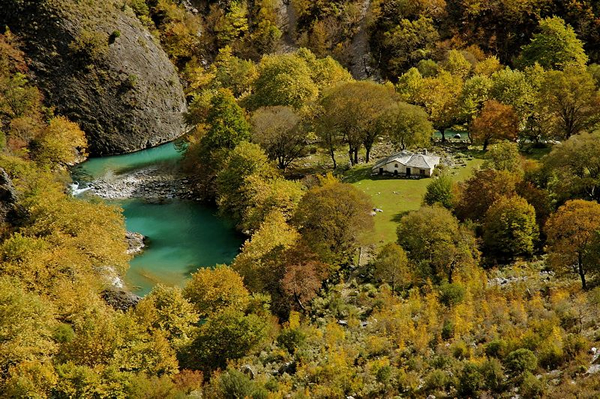 It was probably built in 1738 over the springs of the Voidomatis River, in the Vikos Gorge.

In Heliohori is the church of the Monastery of Dombrinovo dedicated to the Virgin Mary. It was built around 1300 and was a rich female monastery. It is a very interesting fact that Kosmas Aitolos has been operating in the monastery. It is well preserved. 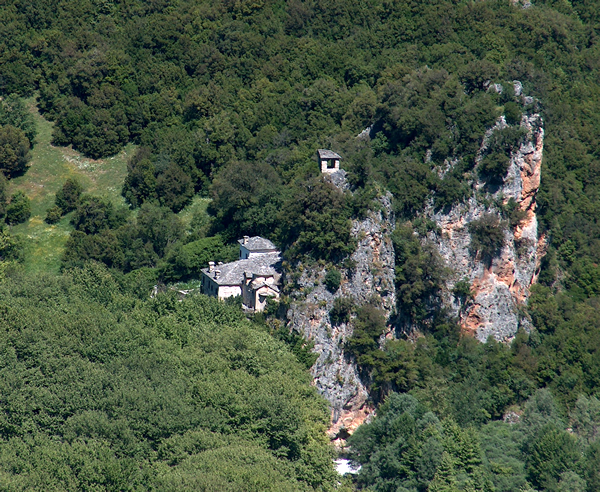 The building of the monastery dates back to the late 16th century, while its church was built in 1665 and its carved murals of 1673 were made by a workshop of painters from the village of Grammos in Kastoria. It is built in contact with a vertical big rock that ends at Voidomatis river.

Monastery of the Holy Trinity in Laista

On the west side of Kleftis mountain, where the village of Paliohori of Laista was once built, there is the monastery of Holy Trinity. It was built before 1800, which is evidenced by the existence of many portable icons dating back to 1795-1797. Its main creator was the monk Damianos. Additionally, a school operated there at the expense of the monastery.

A special architectural style of the temple according to the Athonian style, probably built in 1611/12, with frescoes by the famous Kapesovite painter Anastasios in 1749.